Food Allergies in America Continue to Rise: Are We Allergic to Food or What’s Been Done To It?

Not until our youngest started to fuss. I thought she was tired, so I put her down for a nap. For some reason, which I still cannot explain, I went to check on her, and her face was swollen shut. I raced her to the emergency room.

“This looks like an allergic reaction,” the pediatrician said. “What did you feed the kids for breakfast?” And she started rattling off data on food allergies. The condition now impacts 1 in 13 kids, two kids in every classroom. A life threatening allergic reaction sends someone to the emergency room in the U.S. once every three minutes. My heart raced as I watched my baby struggle to breathe, and as we got her under control, I wanted to understand what was happening: why do so many American children now have food allergies?

Nothing could have prepared me for what I would uncover.

Before having kids, I worked in the world of finance. I’d been an equity analyst on a team that managed $20 billion in assets. I was the only woman on the team, and I covered the food industry.  I understood why the food industry had removed real ingredients from their products and replaced them with fake ones: it drove margins and profitability.

But I’d never thought to ask what all of this was doing to the health of our families.

From 1997-2007, the rate of hospitalizations related to food allergic reactions increased 265%, according to the Centers for Disease Control. 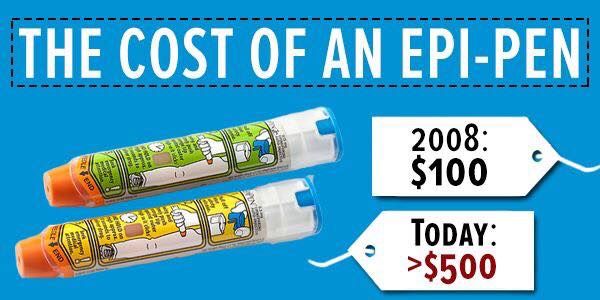 Today, the life-saving device, EpiPen, is now a $1 billion brand, and its manufacturer, Mylan, has profited enormously from the condition.  They have hiked the price of the drug over 500% in the U.S. market to over $600. It sellsfor about $100 in other countries. In the fall of 2016, families came together to demand action in what is now known as #epigate. Congressional hearings occurred, but families are still struggling to afford the device, even as Mylan initiated a global recall.

If the food allergy community were a state, it would be the fifth-largest state in the U.S. by population—right after California, Texas, New York and Florida.

The number of people with food allergies in the U.S. is greater than the entire populations of New York City, Los Angeles and Chicago combined.

The number of people with peanut allergy in the United States more than quadrupled since 1997. And it isn’t just peanuts—milk, soy, corn and other allergies are all increasing at record rates. Geneticsdon’t change this quickly, so what has?

Researchers reporting in the Journal of the American Medical Association state that the costs of food allergies, from medical care to food to pharmaceuticals, is $4,184 per child per year, costing our economy $25 billion, including lost productivity.

To discount this condition in any way is irresponsible.

Thankfully, not everyone is.

The plan is to grow it into a billion-dollar brand. The company is free from genetically engineered ingredients, allergens and artificial additives.

In the United States, we are quickly learning that our food supply contains a lot of ingredients that simply did not exist when we were kids—from artificial food dyes and artificial growth hormones, to excess levels of pesticides now used on genetically engineered foods (GMOs). But it isn’t like this in other countries, and our own American corporations don’t use these ingredients in the products they sell overseas.

That double standard is tough to swallow.

So are we allergic to food or what’s been done to it in America?

With no labels on things like GMOs in the U.S., the biotech industry is able to claim that there is not a single documented case of these foods ever causing harm. There is no evidence without labels because there is no traceability—there is just the escalating rate of allergic diseases in our families.

Correlation is not causation, but as a growing number of consumers opt out of these artificial and genetically engineered ingredients, companies are, too. Target, Costco, Chipotle, Kroger, General Mills and Cheerios have responded to this demand for “free-from” food and are producing more foods free of allergens, artificial dyes, GMOs and artificial ingredients.

A study in the Journal of the American Medical Association says that living in the United States increases your risk of allergic disease “significantly.”

“Children born outside the United States had significantly lower prevalence of any allergic diseases (20.3%) than those born in the United States (34.5%),” said the study led by Jonathan Silverberg of St. Luke’s-Roosevelt Hospital Center in New York.

According to Reuters and Dr. Ruchi Gupta, who studies allergies at the Northwestern University Feinberg School of Medicine, “Food allergies have increased tremendously,” she told Reuters Health. “We do see people who come from other countries don’t tend to have it.”

So are we allergic to food or to what’s been done to it in America?  Especially as other countries take precautions that we haven’t and keep things like GMOs out?

The skyrocketing number of American dealing with food allergies should serve as an alarm to rethink our food.

Food allergies are not a “niche” just as cancer is not a fad.

It’s time to #rethinkfood. The future of our country, our military, and our economy depends on it.

Let us know in the comments. What do you think about the rising rates of food allergies in America? 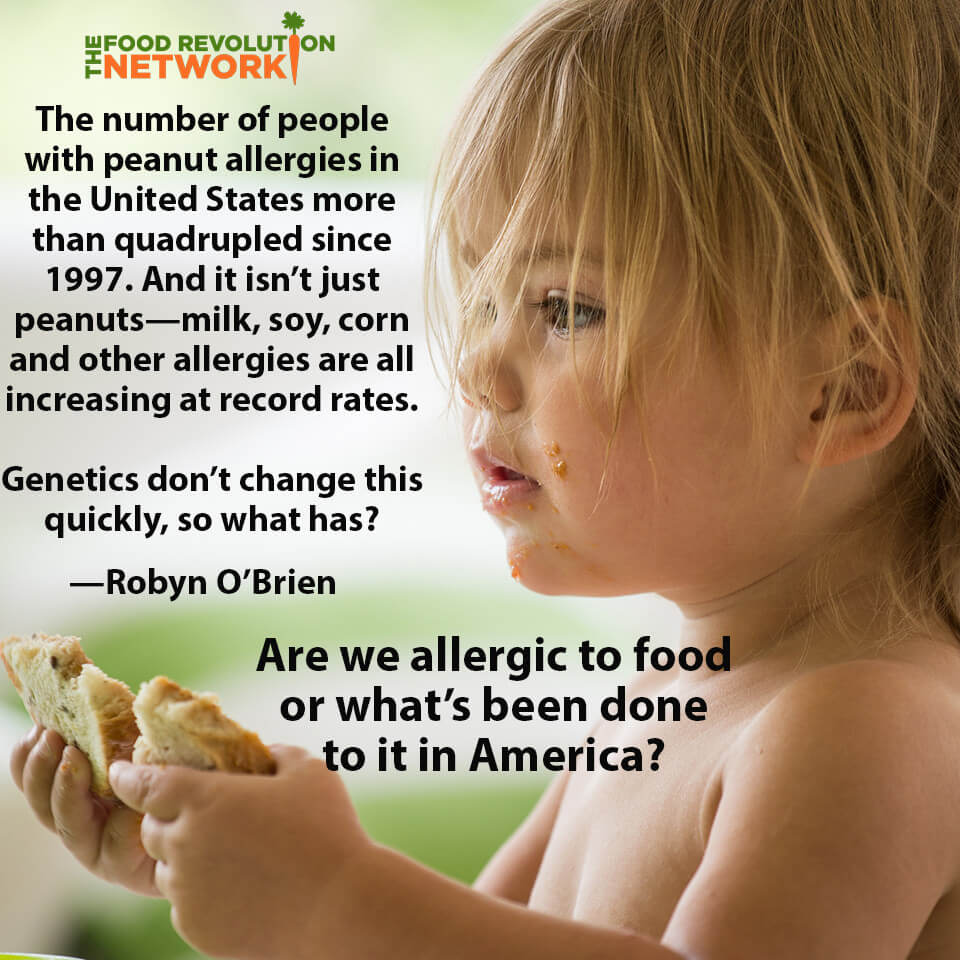 And if you’re inspired, please share this article with your friends and family and your networks. Together, we can change the world for the better!

Note: Image in the bottom photo from Donnie Ray Jones on Flickr under a Creative Commons license with modifications

“The more people who hear this message and move toward diets marked by compassion and respect for life and the earth, the better off our world will be.”

“If you want to fight heart disease, diabetes, cancer, obesity, and dementia - read this book and apply it from start to finish. Your life - and your world - will never by the same again.”

“Ocean Robbins is able to inform and influence people in a way that grips their interest and also touches their soul.”

Put the food revolution into ACTION in your life!

31-Day Food Revolution is your guide

to freedom from a toxic food culture.

Get Your Copy Here Now!

By submitting this form, you’re agreeing to receive messages from Food Revolution Network. Your email address will NEVER be shared or sold. You’re always free to easily unsubscribe at any time. For more information see our Privacy Policy.

Enter Your Name & Email Below to Join the Food Revolution Network and Receive Your FREE Real Food Action Guide!